The first detailed analysis of the ‘Direct Action’ Emissions Reduction Fund auctions, conducted for The Green Institute by former Director Margaret Blakers and Margaret Considine, shows that not only is the scheme ineffective at meeting its own barely credible climate objectives but that, without major changes to its design, it cannot form a sound basis for building a more effective scheme, as many have proposed.

Globally, climate change politics and action are moving faster than ever before. The world is not yet doing what it will take to tackle this immense challenge, but it does seem like the ship is finally turning.

Our movement here is strong, and getting stronger. But our governments fail to act, safe within a political conversation which has moved nowhere since the 1990s. That the Federal Government could now be pulling the same bait-and-switch trick with land use emissions that they played at Kyoto 20 years ago beggars belief. And yet that is what they are doing. And getting away with it.

And analysts and commentators from across the spectrum, instead of looking around the world for real solutions, are seeking some kind of political compromise which would somehow make the Abbott/Turnbull ‘Direct Action’ into a viable alternative.

The Green Institute’s goal is “to change what is politically possible”. Sometimes that involves taking a clear-eyed view that what is currently “possible” is simply not good enough. That is the case here. And that is why we are publishing this important paper at this time.

Margarets Blakers and Considine show, with this (extraordinarily) first ever analysis of the Emissions Reduction Fund auctions, that Direct Action not only fails its own test of delivering ‘real and additional’ emissions reductions, but also that it cannot serve as the foundation for more serious action without very substantial changes to its architecture. Instead of fiddling around the edges while Rome burns, we should design a better model from the outset.

Treating ‘Direct Action’ as fixable only limits political debate, keeping it as the only “possible” alternative. That is not the reality. Our task should be to make what is necessary possible.

Press release: First analysis of ‘Direct Action’ auctions shows it is no foundation to build on 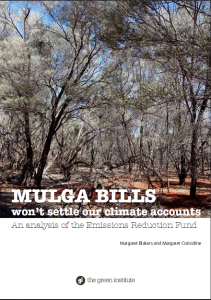 Photo Source: ‘Mulga country at Charleville’ by denisbin from Flickr.