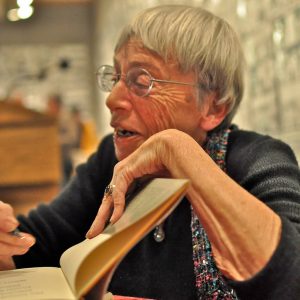 Bertolt Brecht, the brilliant, impatient playwright and political activist, once reputedly said “art is not a mirror to reflect reality, but a hammer with which to shape it.”

Ursula Le Guin, the extraordinary writer who has died aged 88, showed through her beautiful work that the greatest art can, of course, be both mirror and hammer. Or, more subtly, the sculptor’s keen observational eye and gentle fingers to coax something new and wonderful from the clay. For me, there is no greater and wiser observer of humanity’s genius and imperfections, of our incredible and diverse capacities for love, hate and apathy, of our grand visions and tiny daily habits and predilections, than Le Guin. And there is nobody who has woven these observations into a more perfectly judged lesson in not just what is, but what might be – reality and possibility coming together.

Le Guin’s writing defies pigeon-holing. The closest I can come to describing her work is as parables, but that sounds too much like unsubtle religious education, and glances over the extraordinary beauty of her prose. Beautifully told myths for our age, perhaps?

The books which introduced her to me and many others, A Wizard of Earthsea and its sequels, would today be categorised as Young Adult fantasy, but they don’t really fit that genre, or any other. Yes, there are wizards and dragons and adventure, but the exploration is internal, with gentle but powerful moral lessons that could not be further from those of Tolkein, for example. The point is not to fight and win, but to understand and come to terms with oneself, with the world around us, and with where and how it all fits together.

While many of her adult novels, such as The Left Hand of Darkness, are often called science fiction, they certainly don’t slide comfortably into that genre, either (although it is now an incredibly wide set of genres that is still unfairly maligned). Left Hand, a story of a world without gender, told by a visitor from our world, is one of the most remarkable descriptions of what is and what might be that I have ever read. Like many of her works, it deals with power – at both the interpersonal and the grand, systemic level – in subtle and fascinating ways. The Dispossessed, perhaps her most explicitly political novel, explores concepts and models of capitalism, anarchism, pacifism, and more, through a story pieced together in a fascinating, non-linear way.

For me, it is in her short stories that Le Guin’s genius shines through the best. In several collections of stunning miniatures, she paints brilliant pictures that are powerful, moving, reflective, urgent, and truly beautiful. The very brief The Ones Who Walk Away from Omelas is a must read which really belongs in every political science or ethics curriculum. I don’t want to describe it – I want you to read it. It will hit you in the guts and remain with you, insinuating itself into your thoughts, forever.

The collection entitled Changing Planes is, on the other hand, a gentle and fun read, one on level, based around the idea that, when waiting, bored, in airports, people can “change planes” – not aeroplanes, but planes of existence, exploring whole new worlds. Each story is a brief description of another world and its people, described by a human visitor. Of course, the observations of these sometimes very alien worlds are actually observations of aspects of humanity, looking deep into our souls to capture something truly remarkable, made possible by describing something superficially very different. I often dip back into this book, re-reading my favourite stories, picking up something new every time, and coming away with a renewed love and respect for humanity.

How did Le Guin’s art create and contribute to political change? I would say by crafting better, more thoughtful people through her art, by showing that the seemingly impossible is possible, and by encouraging people, directly and indirectly, to use their own power to create those impossible worlds. Truly great art informs and influences the socio-political culture in which socio-political change happens. And, given how many passionate fans of Le Guin’s I have met in radical political movements, it is clear that she has done exactly that.

On that note, Le Guin’s speech to the American National Book Awards a couple of years ago was widely reported, but it’s worth concluding with her words there, as they do truly encapsulate her art and her importance.

“Books aren’t just commodities; the profit motive is often in conflict with the aims of art. We live in capitalism, its power seems inescapable – but then, so did the divine right of kings. Any human power can be resisted and changed by human beings. Resistance and change often begin in art. Very often in our art, the art of words.”